Anger About the Condition of the Irish House 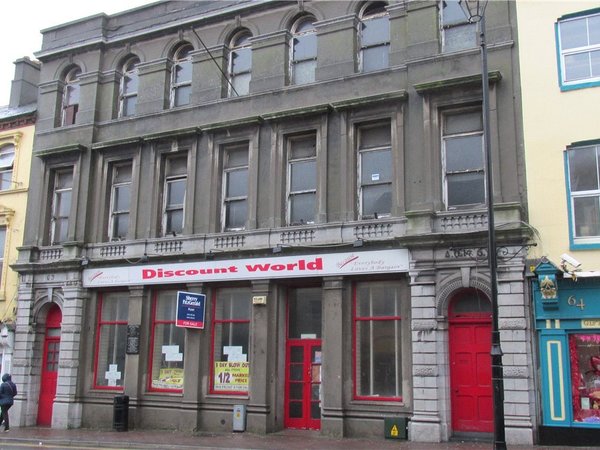 Recently on social media, people have been complaining about the disgraceful condition in which the Irish House has been left after its most recent occupancy, as a discount shop (shown above).

Many people in Tipperary remember the glory days of the Irish House as a café and popular tourist destination that was so capably run by Alice and Noel McInerney. Before that, many readers will remember it as "the Tech", or Tipperary Town's Vocational School.

Located in the middle of the Main Street in Tipperary Town, it is a magnificent building, comprising three stories and boasting a very impressive facade.  However, decades of neglect have resulted in the building falling into disrepair and it now looks a sad reflection of its former glory.

One of the people who raised the issue of the Irish House on social media was Breda White. She posted on her Facebook page "Don't you think whoever the owner of the building which used to be the Irish House on the Main St. should have to make it presentable? And why are they allowed to leave this beautiful building in the state it's in? Don't ye think it's about time Tipperary Town stood up for our Main Street?"

That post drew a lot of attention and it was shared on the Tipperary Town Facebook page, again drawing a lot of concern and anger at the current state of the Irish House. One commentator suggested that the Council had the power to require the owners to rehabilitate the building under the Derelict Sites Act.

The property to which you refer located at 63 Main Street, Tipperary Town (formerly known  as “The Irish House)   has been determined by this Council to be   a “Derelict Site” pursuant to the Derelict Sites Act, 1990.     It  was the subject of Notice served on the “reputed owners” confirming that it is the Council’s intention to enter the site on the Council’s Register of Derelict Sites.   That said Notice also set out works required to be taken by owner in order to prevent the property continuing to be a derelict site.   Failure to undertake the works as stipulated will result in property being entered on the Derelict Sites Register and the owner being liable to the payment of a levy.

A spokesperson for the Action Group said that they were pleased with this response but felt that further information was needed. Another email was sent to the Council asking for answers to the following questions:

The Group says that the email seeking the additional information was sent on 14 August, pointing out that the answers to their questions would have been contained in the Notice that was sent to the owners and that it should be easy for the Council to supply the answers. A reply from the Council stated that they would "revert within the coming days with replies to your queries".

The Group says nothing was received by 20 August, so a reminder what sent. Apparently, at the time of publishing this article, no response had been received from the Council.

If you would like to contribute any informaion that might shed more light on this subject, please email This email address is being protected from spambots. You need JavaScript enabled to view it..

Should you wish to contact any of your Elected Representatives about this issue, you will find their contact details HERE.